In November 2015 MARLIN Design received an instruction from the client who had recently purchased this end of terrace three bed derelict cottage in Abridge. The property is the last in the Conservation area. Our brief was to provide a modern three bedroom home, with a first floor bathroom, and extended open plan living to the ground floor. The client wanted to take advantage of the huge rear garden and view beyond. There was one stipulation within all of this; a wedding was planned for the 13th August 2016…in the garden. Whatever works were to be done had to be completed before then. Knowing of the deadline, we worked with the Planning Officer and Conservation Officer at Epping Forest District Council to ensure that the design proposed would be acceptable to them, so that when the applications were submitted, we could be comfortable in the knowledge that approval would be granted at the first attempt. This was the case, with Planning being granted in late January 20167. Following the subsequent Building Regulations approval the client was able to appoint CCBM Builders who started work on site in March 2016. Following demolition and construction phases the project was completed on time and the builders left site during the first week of August. The wedding took place as planned on August 13th.

This extension, in a small development of houses, in Bishop’s Stortford, has created a forever home for ‘Mum’. Moving from 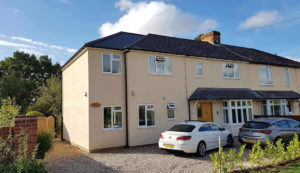 MARLIN Design was contact by this client to extend their home to provide a larger Living room, thereby adding space

Work carried out within part of The Grange, on Rye Street, Bishop’s Stortford, has brought the second design award in

This Bishop’s Stortford home was in need of some serious TLC and extra space. The flow through the house from

We offer services in all the surrounding areas in Hertfordshire and Essex and across London.

We welcome any enquiries at any time so please email us:
admin@marlin-design.co.uk or call